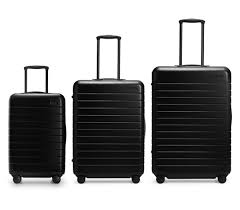 I’ve reviewed or used pretty much every major carry-on wheeled suitcase over the years, since I always avoid checking my bags, even on my many flights to Asia. I used a Tumi roller board soft-sided ballistic nylon 22-inch suitcase for many years; at the time it was one of the costliest, but best-designed products of its kind. It even came with a lifetime warranty, although no longer.

I’ve tried products from Andiamo, Rimowa, Eagle Creek, Costco, Briggs and Riley and many others.  For the past three years I’ve been using the Briggs and Riley equivalent of the Tumi, but with four wheels – called a spinner. It’s been my mainstay because of its durability and its clever expansion system. My goal has always been to use a suitcase with the most capacity that’s easy to pull through airports.

The Briggs compression feature lets you pack more stuff into it when the suitcase is in its expanded mode; after packing you can push down on the top to ratchet it into its compressed state. The one design flaw is that its soft side construction reduces its stability on the 4 wheels, and it can sometimes tip over with a heavy bag on top. I also generally prefer a soft sided bag because its gives a little bit when you over stuff it.

After seeing so many being used by fellow travelers, I was interested in trying an Away suitcase. Away is an on-line maker of hard-sided suitcases, being sold at moderate prices. Their marketing strategy is to bypass retail stores to avoid the large markups, typically at least 50%, so they can sell at a lower cost.  Still, Away needs to use a portion of that markup to promote their bags on line, and elsewhere such as podcasts, and they do so heavily as they try to grow. They also are trying to appeal to the tech-savvy by adding a technology feature into their luggage.

Their carry on 4-wheel suitcases cost $225 to $245, more expensive than the hard-sided plastic suitcases available from Costco and Samsonite, often for under $100, but less than half of what Tumi, Rimowa, and Briggs charge for their versions. They offer the standard carry-on size and one slightly larger, called The Bigger Carry-On that they claim still qualifies as a carry-on on most domestic flights. They also make larger size suitcases, and to simplify storage, they are sized to nest within each other.

I was somewhat skeptical that the Away could compare with my soft-sided Briggs but asked Away for a loaner of the Bigger version to try. After using it on a few trips I found it to be a well-designed product. Not, necessarily as ruggedly built or feature laden as the higher-priced hard sided bags, but very thoughtfully designed by a team that understands traveling. I’d call it basic with a few practical extras.

The bag opens like a book and has two large, equally sized compartments. A mesh panel that can be tightened covers one side and a zippered flap covers the other side, keeping each side’s contents in place. Cleverly, the bag is sized carefully to provide more room than my 22-inch Briggs inside and holds a considerable amount of clothes, yet easily fit on Southwest’s overhead compartment, including their smaller 737 models.  It comes with a small pouch and a small  laundry bag to hold a couple of days clothing. On a recent three day trip I packed my things on one side and my wife packed hers on the other, the first time we ever managed to take just one suitcase.

The shell is matte finished with attractive horizontal grooves that shows scuffs like most hard-sided bags. It’s a no frills design without the added exterior reinforced corners, heavy duty zipper, and other accoutrements found on the more costly bags. But the shell is also more flexible than others and can perhaps swell a half-inch to squeeze in a last minute jacket. The zipper that’s attached with vinyl piping is a basic design and the handles, used mostly for removing from the overhead or walking up stairs, are plastic and not very comfortable because they don’t pull out very far from the suitcase.

Its high-tech feature is a built in 10,000 mAh battery for recharging your phone or tablet. It snaps into a slot under the retractable handle and is is protected by a hinged lid. It also comes with a recharger with plugs for different countries in its own mesh case. It can recharge a phone 3 or 4 times by attaching a USB cord you provide.

I was skeptical at first but found it to be useful because it was so easily accessible while sitting waiting for my flights. Because of regulations that prohibit luggage from being checked with batteries inside, and because you might want to use the battery during your flight, the snap out feature was clever and the battery was thin enough to fit in a shirt pocket. A battery such as this would cost about $25.

After four trips, I like the bag a lot. It seemed sturdy enough, very stable with a bag on top, and rolled easily – although the rollers sometime turned in a slightly different direction than I was pushing.  The handle was sturdy and could be set to different heights. My biggest complaint was the zipper pulls. When trying to close a stuffed case and pulling the zipper closed, you have to grip some sharp protrusions on the zipper pulls. The protrusions are the tangs that snap into the built-in TSA combo lock.

The suitcase comes with a lifetime warranty, although from experience, something so large is expensive to ship, so many don’t bother. They also have a few stores in New York City, San Francisco and Los Angeles. But based on the reviews of the stores on Yelp, they still have work to do to make them more hospitable to visitors. Which is probably why so many may want to shop by Internet to begin with.

In summary, Away provides a very good product at a reasonable price that should attract travelers that want a bag that’s easy to travel with, allows you to organize your packing, and hopefully just keeps working.